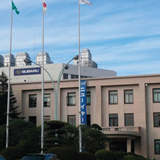 By implementing the automated toolpath creation functions in WORKNC CADCAM, Fuji Heavy Industries has been able to reduce both programming and machining times and has greatly simplified its 3 and 5-axis CNC programming.

"The savings in administration, programming and machining times have produced many benefits and cost savings"

Yoshimi Chiba, Manager of the Machine and Tool Control Section

WORKNC was first introduced into Fuji Heavy Industries in 2001 after extensive evaluation showed that it reduced programming times for roughing toolpaths by half and significantly reduced overall machining times through the quality of its rough milling and 3D contour machining paths. Yoshimi Chiba, Manager of the Machine and Tool Control Section at the Subaru Manufacturing Division’s Gunma Plant, says, “We expanded the system into the design and manufacture of injection molds in 2003, die cast molds in 2004 and we introduced WORKNC’s Auto 5 simultaneous 5-axis machining module in 2008. Year on year we have been developing automated processes in WORKNC in a project which is ongoing and continues to provide one improvement after another.” He continues, “Right after installation WORKNC halved roughing program preparation times and automatically produced our documentation which has saved us a significant amount of effort. The savings in administration, programming and machining times have produced many benefits and cost savings.”

Fuji Heavy Industries decided it needed to implement 5-axis machining to cope with the deep and complex cavities found in die cast molds. Yoshimi Chiba says, “We decided to implement WORKNC Auto 5 as we were familiar with its ease of use and its capabilities in the manufacture of our stamping tools and injection molds. Additionally, we were attracted by its ability to automatically convert 3-axis toolpaths into simultaneous 5-axis toolpaths.”
Assistant Manager Ichiro Kono elaborates, “WORKNC Auto 5 has enabled us to cut more of the part on the machining center, reducing our reliance on EDM and producing an overall time saving. 5-axis machining is complex so the ability to automatically convert 3-axis into 5- axis toolpaths is a major benefit. When you consider the immense difficulties of accurately setting all the angles for 3+2-axis machining, WORKNC Auto 5 has made our life much easier, resulting in reduced programming times. Additionally, it has enabled us to increase the volume of work completed in-house on the molds for the next generation Subaru boxer engine.”

Fuji Heavy Industries benefits from the ease of use and short learning curve of WORKNC. Assistant Manager, Atsushi Takahashi says, “I have personally experienced how easy and trouble free CNC program preparation is with WORKNC when producing our stamping tools and injection molds. We use other CAM systems in our factory, but our employees tell me that WORKNC is the best and that it can be learnt in less than half a day.”

Assistant Manager Mr Hitoshi Sakai is impressed with the automated programming possible in WORKNC. “We used the customization capabilities of WORKNC to automatically create Workzones for new parts so that even personnel unfamiliar with the software can prepare a CNC program. Furthermore, we have built an almost completely automatic system that allows CNC programs for parts such as small part flange lifters and scrap cutters to be produced with one or two mouse clicks. Thanks to WORKNC’s flexibility, the principles can be applied to other component groups and advances are constantly being made towards full automation.”
For the future, Atsushi Takahashi believes that increased automation is the way forward. “WORKNC is proving itself to be an effective tool for developing automated systems. I expect to see even greater levels of automation in the future, with automatic program creation on the shop floor, automated geometry recognition, and viewing and analysis of NC data with the WorkXPlore 3D viewer.” Ichiro Kono adds, “The next step for WORKNC Auto 5 will be standardizing 5-axis machining to bring even more automation to this complex area of CNC programming.”

"The savings in administration, programming and machining times have produced many benefits and cost savings"
Yoshimi Chiba, Manager of the Machine and Tool Control Section