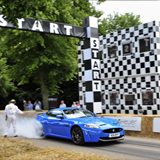 Jaguar Land Rover produces a large number of prototype vehicles each year, and uses WORKNC CAD CAM software in its CNC model making workshop and toolroom. As well as manufacturing prototypes using CNC equipment, Jaguar Land Rover has extensive rapid prototyping facilities with 12 machines for additive manufacture, and anticipates that it will produce approximately 50,000 parts, using these techniques alone, over the next 12 months.

The desire to improve the efficiency of CNC programming and manufacture in the prototyping area drove the company to evaluate new CAM software. It picked WORKNC for its ease of use, as shop floor programming was one of the major changes it wanted to implement. WORKNC has an ergonomic interface and a structured approach to toolpath generation, making it easy to import IGES data from Jaguar Land Rover’s CATIA CAD software, and apply safe and effective cutterpaths. Its ability to run on a PC and its embedded tools for the production of setup sheets and documentation were also key feature requirements.

The users of the WORKNC CAD CAM software are experienced and skilled machinists, and having the software in the workshop enables them to program parts themselves, and optimize CNC toolpaths while the machine tools are cutting. Not only has this enriched their skill set, but it has also empowered them by giving more control over the machining process. Previously, CNC programming was carried out off line in the prototype design office. Installing WORKNC in the workshop has produced benefits here too, allowing the designers to focus more of their time on high value design activities, enabling Jaguar Land Rover to achieve more with the same resources.

The CNC model making workshop uses WORKNC and has two Mecof 5- axis machining centres, one of which is 12m x 2.5m x1.5m with a rotary platform. This machine is capable of machining a full sized clay vehicle model. It is also used for producing models of other parts, such as interior trim and door casing mock ups, in polyurethane board. The style of these is then refined, before the model data is captured and returned to CAD for further feasibility studies. The second Mecof is used for smaller parts, such as vacuum forming molds for fuel tanks, again in polyurethane board. WORKNC’s 3+2 programming capability is invaluable for this process, enabling the company to get a snapshot of the vehicle’s evolving design. Furthermore, the reliability of the software, the quality of the training and support, and the robust post processors has instilled confidence in the users.

For some stages of vehicle development, such as air bag tests, actual production parts, for example door pillars, need to be tested for reliability during their deployment. This requires the manufacture of prototype injection molds which include a considerable number of holes. Jaguar Land Rover uses WORKNC’s feature recognition module, which sorts and machines these automatically. Predefined drilling and boring strategies are applied according to hole type and size, eliminating the possibility of an error and greatly reducing programming times.
Apart from allocating a suitable datum, the creation of toolpaths can start as soon as a model has been imported from CATIA. WORKNC’s Global Roughing, which updates the stock model as machining proceeds, and its Global Finishing, which combines Z Level and Optimized Z Level Finishing, are key considerations for Jaguar Land Rover programmers.

The toolroom at Jaguar Land Rover has three seats of WORKNC driving a number of modern machining centres including a full five-axis DMG 100P machining center. Hard materials and high density polyurethane are machined here for applications such as prototype press tools for BIW Panels and heat shields, as well as prototype injection mould tools. Electrode manufacture is simplified by WORKNC’s ability to extract electrode geometry directly from the CAD model. For the DMG 100P, Jaguar Land Rover has recently installed WORKNC Auto 5, which automatically changes 3-axis and 3+2 axis toolpaths into continuous 5-axis paths. The users are already seeing the benefits of using shorter and more rigid tools, the smoother toolpaths Auto 5 creates, and a reduction in wasted, overlapped movement.
Jaguar Land Rover views WORKNC as a powerful part of its strategy for servicing an increasing need for prototypes, making it an important element in the vehicle development cycle.